After arriving in Sapporo from Tokyo Narita the night before, we had given ourselves a 'day zero' to reassemble the bikes and to acclimatise ourselves to Japan space and time. This allowed some strolling around central Sapporo, finding great little noodle shops and bars in a very laid back and friendly city.

The following morning we left Sapporo Richmond Hotel around 9:30 and rode pavements to the city limits where we picked up Route 453 in the direction of Lake Shikotsu, (shikotsu-ko) where we arrived 3 hours later.

Shortly after leaving Sapporo the heavy traffic of dual carriageways disappears and soon you are riding on well-kept secondary A-roads with one lane in each direction and at least a metre of hard shoulder to ride on if necessary. This is a sort of shared pedestrian/cyclist zone when there aren't pavements between towns but we didn't meet many walkers. Old ladies on bikes eyed us curiously but smiled and nodded when we offered a 'Domo' (hello) or 'Konichiwa' (good day).

Most of the journey was up and down steep hills, isolated and are surrounded by very dense trees and vegetation.

Unlike the Japanese prints of tranquil forests you realise that the countryside here is LOUD! The cicadas, grass hoppers and other insects buzz are almost deafening. Dragonflies dive-bomb around you along with bird size butterflies.

Coming over the crest of a hill we descended to Shikotsu-Ko around 3pm, so we decided to stop and recharge at Marukoma Onsen in the shadow of mount Eniwa Dake (1320m) for a big ramen lunch.

We followed the road around the lake until it met with Route 276. After a horrible tunnel, a puncture stopped us at the side of the road cursing. The 'armadillo-like' tyres we had reluctantly accepted in London instead of the real thing were clearly not as tough or durable (a small metal staple caused a second puncture a few days later).

The weather in the afternoon turned, and we ended cycling in the rain for the last few hours of our journey.

A minor miscalculation of the speed and distance we could achieve per day resulted in us cycling in the rainy night of wild Hokkaido.

Along with signs warning of tumbling rocks we started to see deer warnings. At dusk we spotted our first bear warnings. You what? Bears???

I kept thinking about those programs I watched when I was a child about bears who live in the mountains, surrounded by waterfalls, river and streams full of salmon, bamboo forest.
Richard kept saying that they were just miniature, bonsai-like bears, similar to pandas and vegetarian, but I couldn't stop thinking about typical news stories where the tourist walks into the forest with an iphone and appears 20 days later... or somebody finds their chewed remains some time later.

Lots of adventure for our 3rd night. This area joins lakes Shikotsu and Toya into a national park, with beautiful scenery and waterfalls along the way. We could hear the water crashing over the driving rain as we sped along in the dark, heads down.

The hills flattened out and the rain ceased, clouds parting to present us with a sky full of stars for the last few km.

Soaked but still in one piece, we arrived in Lake Toya (Toyako-san) just in time for the fireworks display!

We stayed the night in our first tatami room: shoes off at the door, futons on the floor and small rice-filled pillows for an amazingly comfortable sleep. 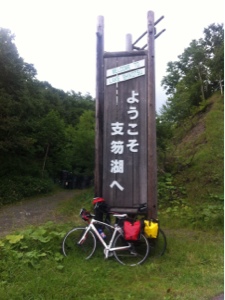 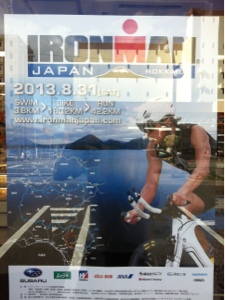 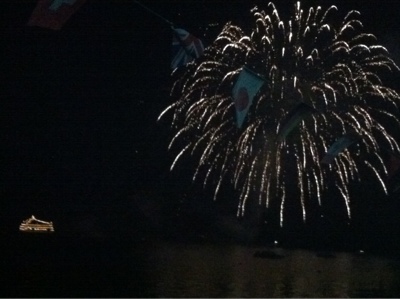 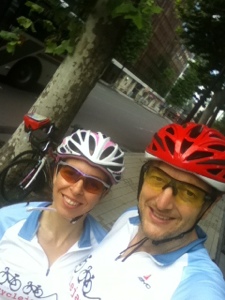 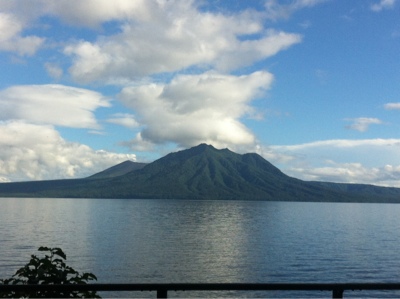