Having finally accepted that this had become less of a cycling tour and more a tour with cycling (I should maybe get the tour shirts over-printed with the bits we did by train for accuracy), we boarded the Rapid at Toba, carrying panniers and bike bags over our shoulders, heading for Nagoya.
At Nagoya station, huge modern skyscrapers were visible from the platform as we changed onto the famous Shinkansen 'bullet train'. This super-fast line took us on to Shin-Fuji, the Fuji stop.
We had a competition as to which one of us would see Mount Fuji first (Coca took it to the extreme of moving further up the train). Fuji is renowned for hiding its 3776m peak  beneath clouds during much of the year, so we were by no means certain either would see it.
Clouds adopted Fuji-shaped tops in the distance from as far back as Toyohashi, about 150km from the mountain 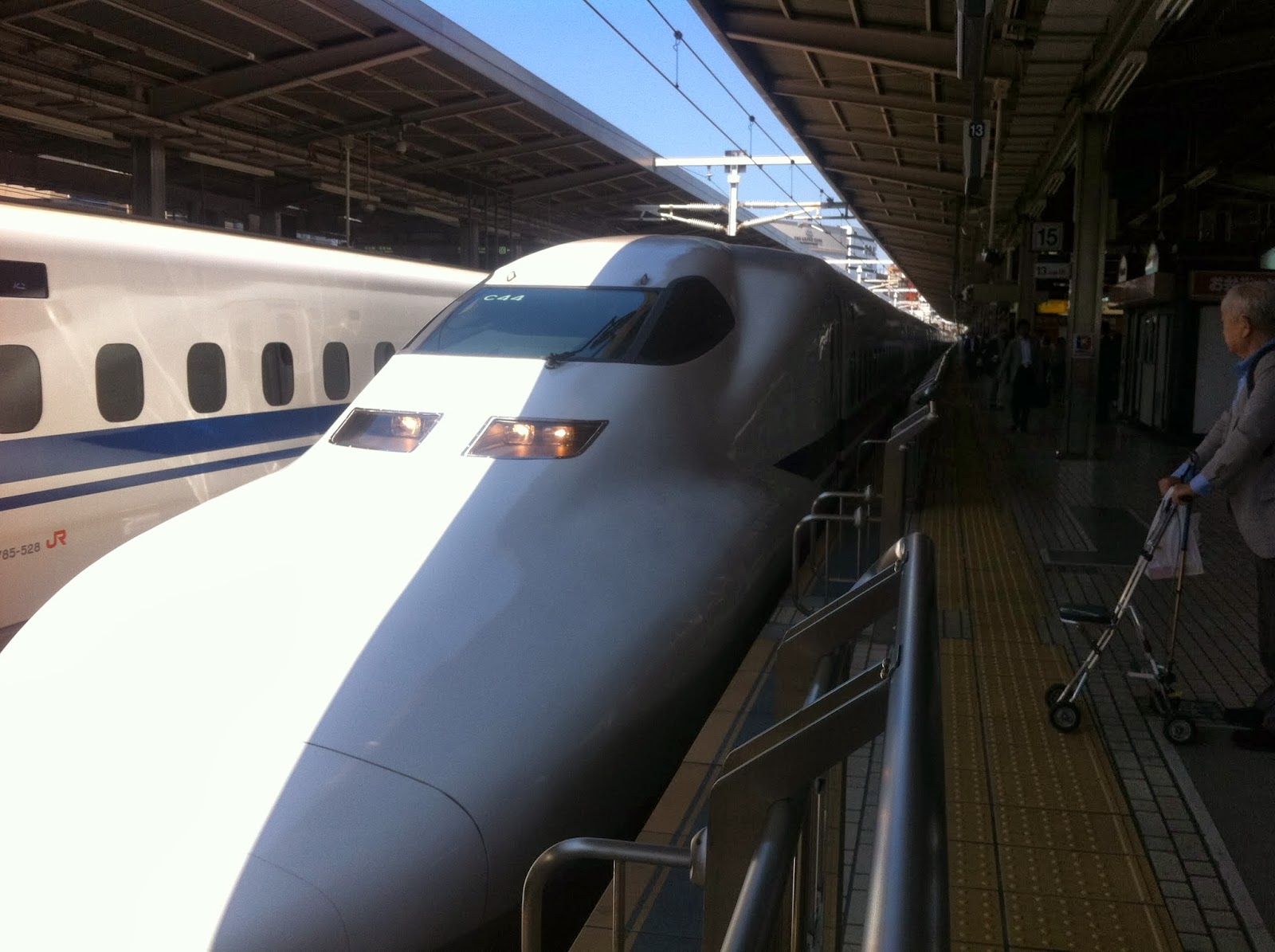 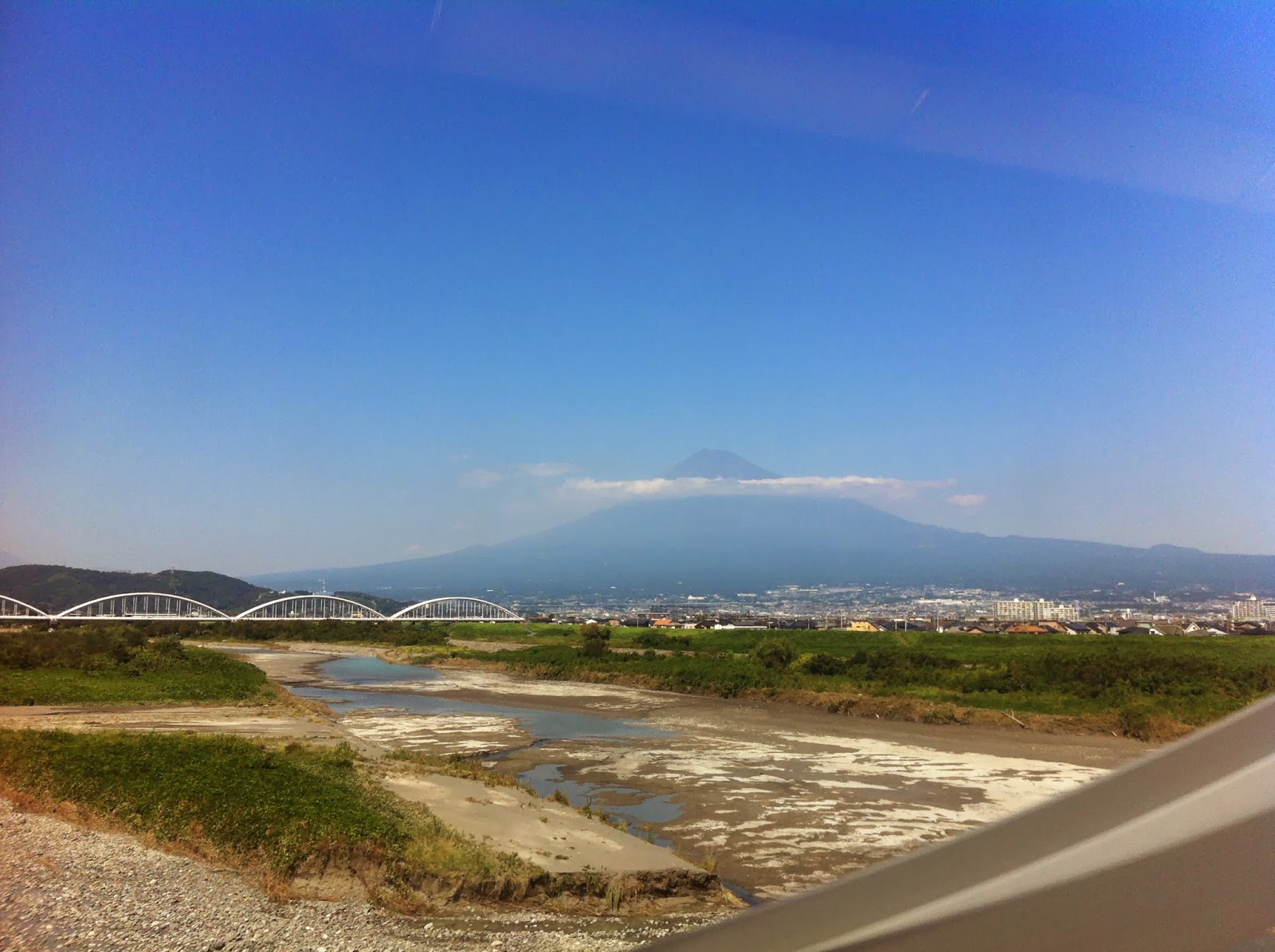 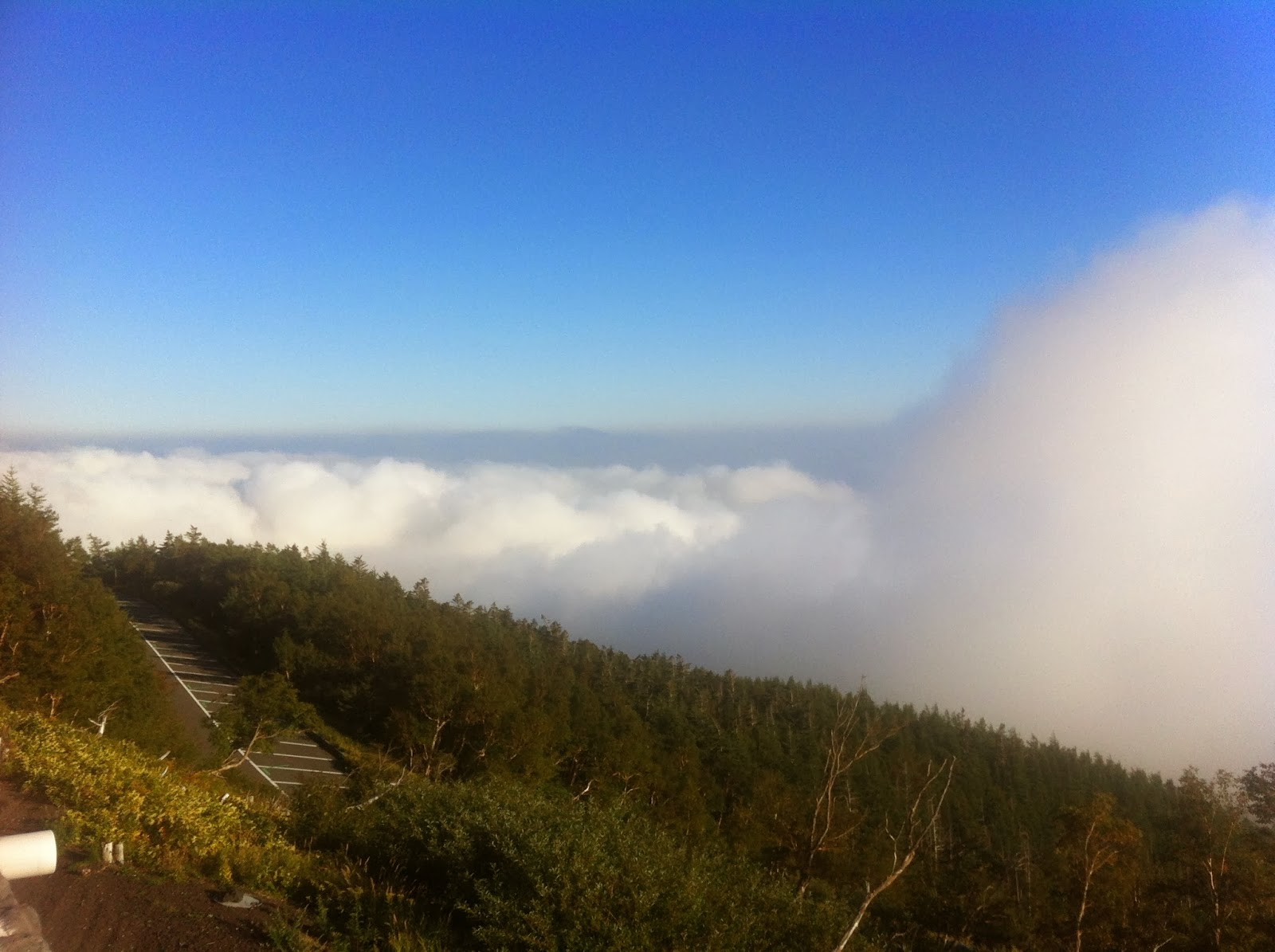 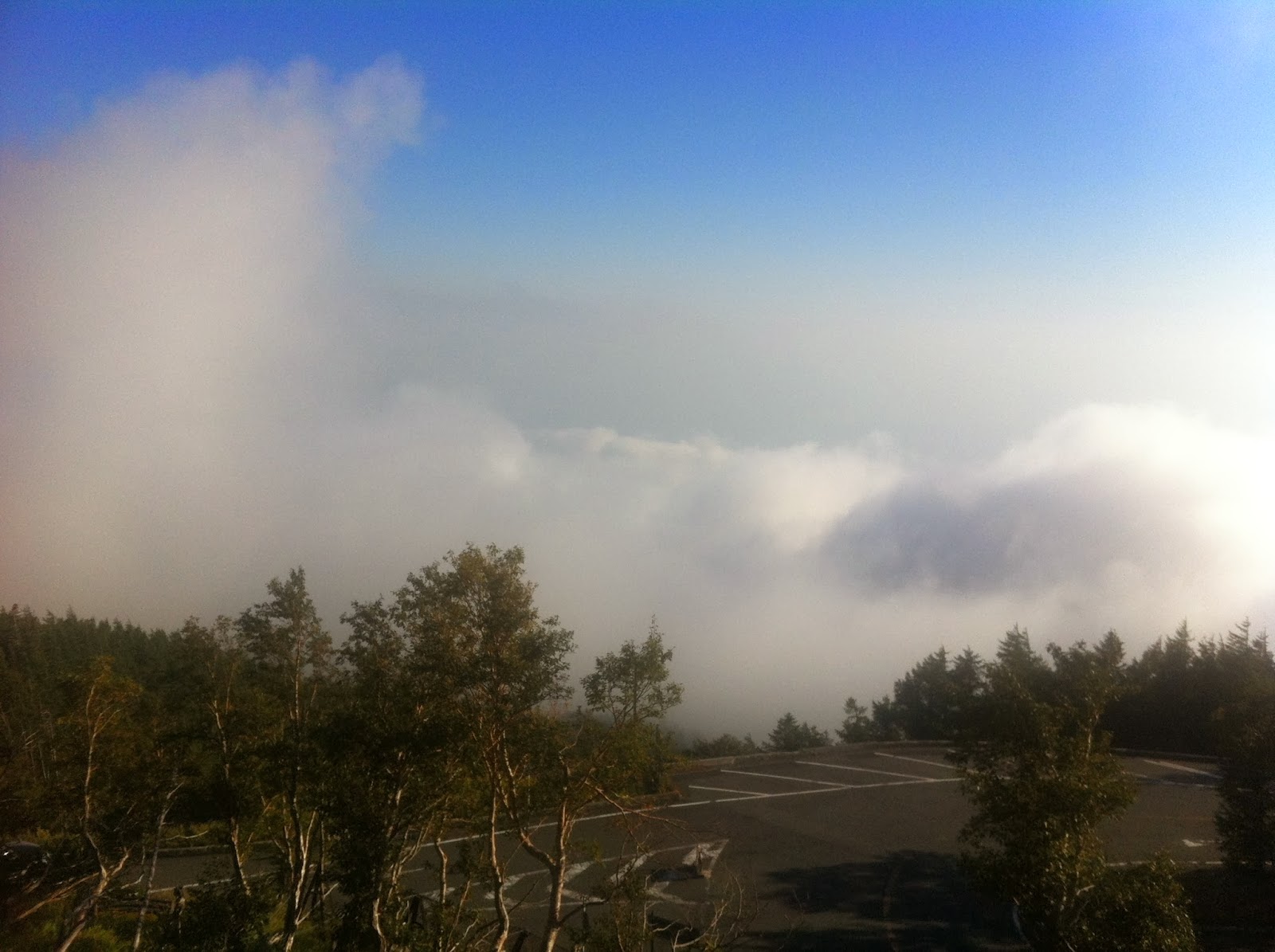 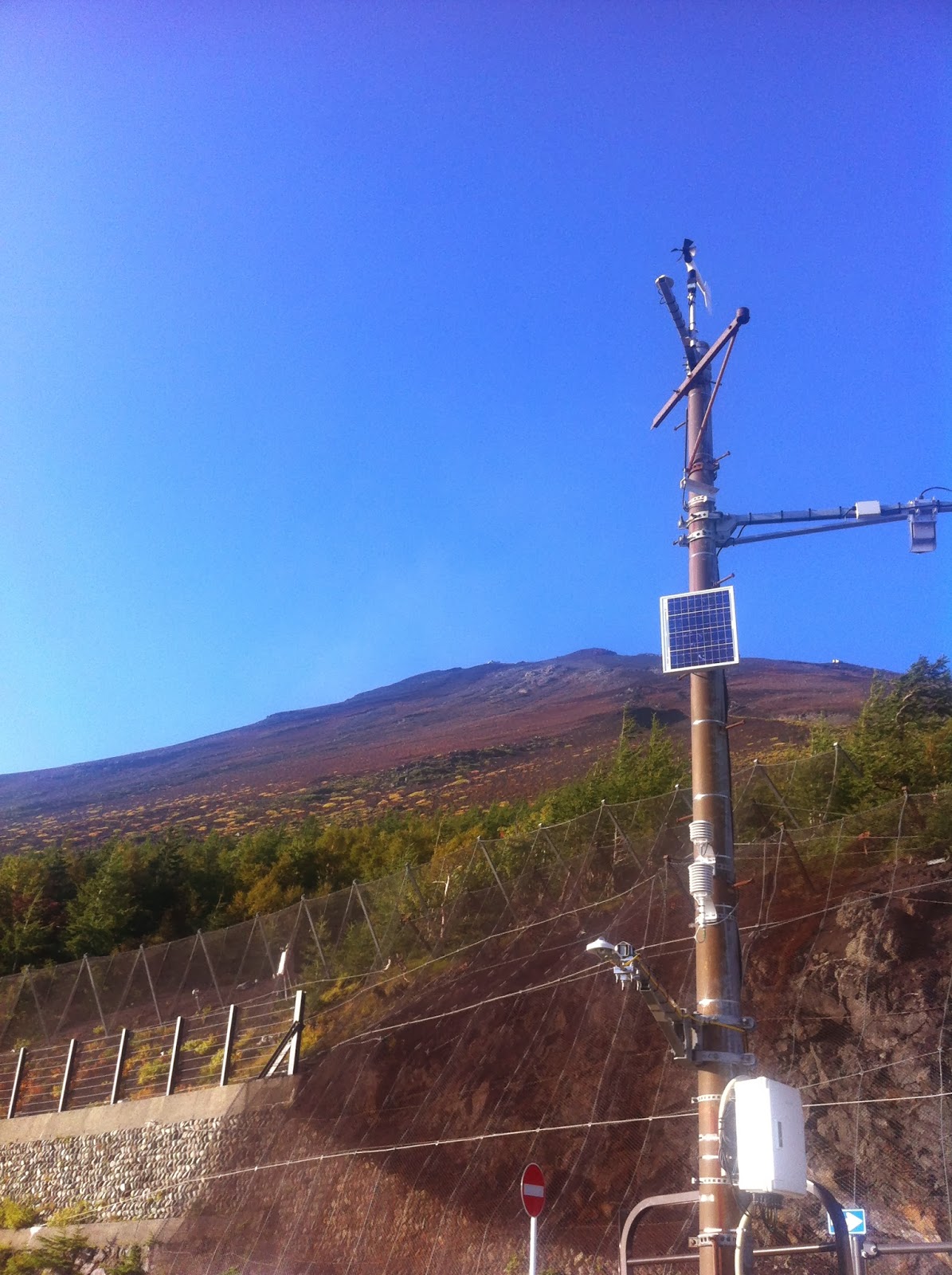 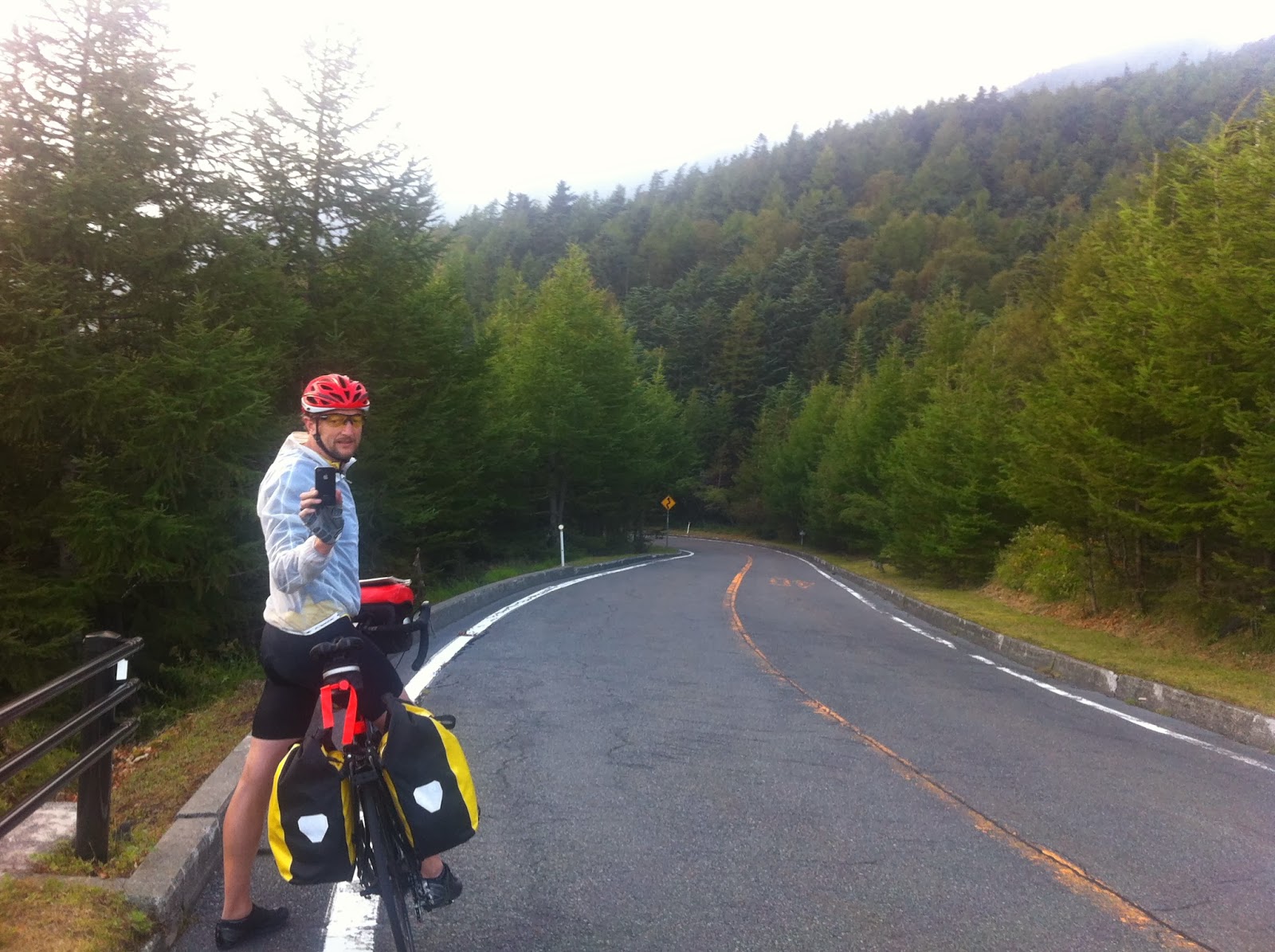 We reassembled the bikes in the car park at stage 5, 2400m and above the clouds. It's possible to reach stage 6, but on foot, not on road bikes. We met a couple of researchers from Norwich Uni who had dodged the barriers at stage 6 and climbed to the summit, sleeping out on Fuji overnight. No bears here, but very cold. They looked tired but elated, and one eyed our bikes jealously, "I knew I should have brought my mountain bike!"
We layered-up: long sleeves over cycle jerseys, rain jackets over everything.
Goodbyes as the climbers waited for their bus down, and we descended into the cloud. A series of hairpins slowed progress until we dropped back into the late sunshine, watching the sky go orange and then red.
In twilight we hit the main road, downhill and much straighter for longer. Smooth tarmac and hardly any passing traffic encouraged early evening recklessness and we recorded speeds of 41/42mph through streaming eyes. Local speed limit noted as 40kmh but no speed traps thankfully.
A full moon lit our way as we skirted the line of hills between mountain and sea, and we passed through the suburbs of Fuji town after dark. A lucky meeting with a local walking his dog provided us with a route to the Shinkansen station. Typical of the unexpected generosity of Japanese people, he reappeared some time later at the station in his car as we were dismantling our bikes, worried we might have misunderstood his directions and lost our way. We thanked him again, waved him off, smiling, and boarded the bullet train to Tokyo.